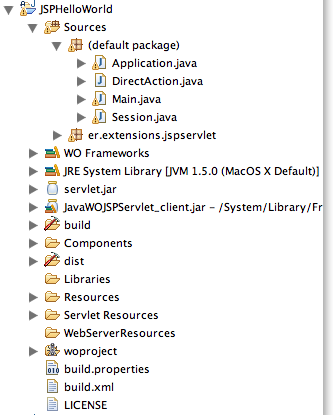 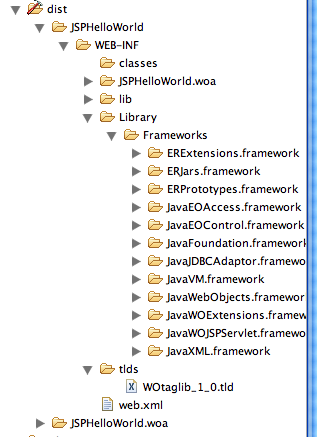 If this were not a project wonder project (that is, if it's Application and Session classes did not extend ERXApplication and ERXSession), we could copy over the JSPHelloWorld folder from dist into tomcat's webapps folder, restart tomcat, pull up a browser, type in http://localhost:8080/JSPHelloWorld/WebObjects/JSPHelloWorld.woa

, and see the same boring hello world page we saw when we ran the application as a standalone WO app. If you really want to verify this, just make your Application and Session classes extend WOApplication and WOSession instead, rebuild the thing, deploy it into tomcat as described above, and have a go.

Man, that tells you a lot. Checking the logs (tomcat-root/logs/catalina.out) tells you little more that makes any sense. But I've done the desparate scrounging on Google, so I'll spare you the expense: it's because Project Wonder does a lot of early intialization and patching of terrible WebObjects code, and the process of patching is broken when you run things in a servlet container. When you're running them as a standalone app, you have a static main method in your Application class that calls ERXApplication.main(), which in turn does all that cool pain saving patching. There's a pretty good thread on the whole business here

. But the main method does not get called in a servlet container because things just operate differently in this world. So we have to do a few extra things:

Before I get started with what worked for me, I want to give a hat tip to Henrique Prange, who came up with a bunch of code that I cobbled together and modified only slightly to get things working. Without his guidance, I'd still be scratching my head pretty and staring at my computer screen with bloodshot eyes wondering what is going on.

The gist of what we're about to do is that we're going to be writing a new ServletAdaptor, which is a subclass of WOServletAdaptor, which is itself a subclass of javax.servlet.http.HttpServlet. This is just a special kind of class that sits around and listens for HTTP requests, and hands them off to the right place when they come in (fairly similar to the WO HTTP adaptor). If you look at the documentation for WOServletAdaptor, it says it is not intended to be subclassed, and I think what they mean by that is that all of its methods except the constructor and one other special method are static. But we're going to subclass it anyway, and override the one non-static method (named init()) to setup the project wonder initialization stuff that usually happens when we call ERXApplication.main().

I'd like to have a quiet, respectful word with whoever at Apple decided to put the first one in WebServerResources. Very confusing.

That is pretty much the trick, but there is one last catch. Somehow, tomcat has to know to use your version of the ServletAdaptor, and not the WebObjects version that breaks with wonder. The container gets this information from the web.xml file that we saw magically generated for us in dist/JSPHelloWorld/WEB-INF after we ran our ant task. If you go into the dist foldr and open up this file, you will see the following near the bottom: