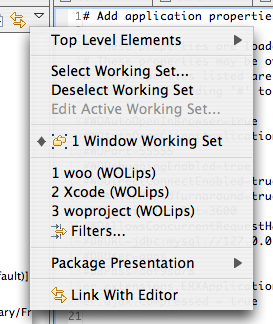 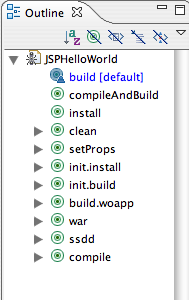 If this were not a project wonder project (that is, if it's Application and Session classes did not extend ERXApplication and ERXSession), we could copy over the JSPHelloWorld folder from dist into tomcat's webapps folder, restart tomcat, pull up a browser, type in http://localhost:8080/JSPHelloWorld/WebObjects/JSPHelloWorld.woa

, and see the same boring hello world page we saw when we ran the application as a standalone WO app. If you really want to verify this, just make your Application and Session classes extend WOApplication and WOSession instead, rebuild the thing, deploy it into tomcat as described above, and have a go.

Man, that tells you a lot. Checking the logs (tomcat-root/logs/catalina.out) tells you little more that makes any sense. But I've done the desparate scrounging on Google, so I'll spare you the expense: it's because Project Wonder does a lot of early intialization and patching of terrible WebObjects code, and the process of patching is broken when you run things in a servlet container. When you're running them as a standalone app, you have a static main method in your Application class that calls ERXApplication.main(), which in turn does all that cool pain saving patching. There's a pretty good thread on the whole business here

. But the main method does not get called in a servlet container because things just operate differently in this world. So we have to do a few extra things: