Sooner or later you will need to develop WebObjects applications that work with SSL requests over https protocol. If ssl is configured on your deployment server, you can probably just change http to https in the app entry URL and the app will probably just work over https protocol. However if your application requires security, you cannot just depend on your users typing in a URL that begins with https. Also since SSL encryption adds more load to the webserver, you may want decide that just some pages need to be returned securely over https and the rest returned via plain old http. In any case, you may want to or need to set up your local OS X development machine to support https protocol so that you can properly test your application. Note also that setting up ssl for testing can be a far simpler task (and not really secure) than setting up real authentic SSL certificates for use in a production server.

These instructions were written and tested on the following, but should work on any 10.5.X config or later

Normally creating SSL certificates for production use is quite involved, however since we are just doing localhost development and testing, we can bypass all the mumbo-jumbo and create the minimal unpassworded private key and SSL certificate the easy way. Do not use this method for creating production server SSL certificates!

Open terminal and follow the commands shown below in my transcript which is self-explanatory if you are familiar with Terminal...

Next run the one single openssl command that will make the two files we need in their final folder that we just created above.
Note you will be asked for a bunch of info for the certificate. Follow what I have done below. In particular, enter "localhost" in the Common Name field!

Configure Apache2 to Use Your Development Certificates for localhost

Next edit the ssl config file itself at
/etc/apache2/extra/httpd-ssl.conf
making the changes shown in the following sceenshot:

Setting up the SSL Config file 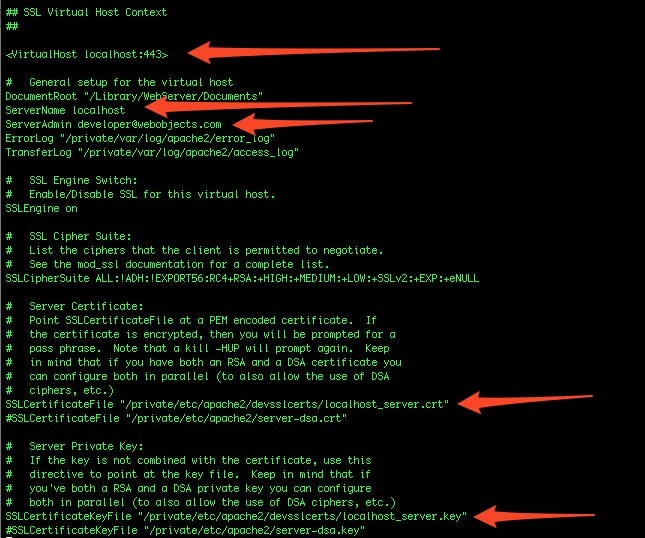 Right at this point I got the error:

After a quick google search I found this which seems to have fixed the error:

Also, for my https://... links my rewrite rules in apache weren't getting fired.  To get them to work I had to add them to the httpd-ssl.conf file just below the General setup stuff shown in the figure above.  I just copied them from my httpd.conf file and pasted them in.  Not sure if this is the best way to handle it, but it's working for me on my development machine at least.

Finally, verify that https is working: 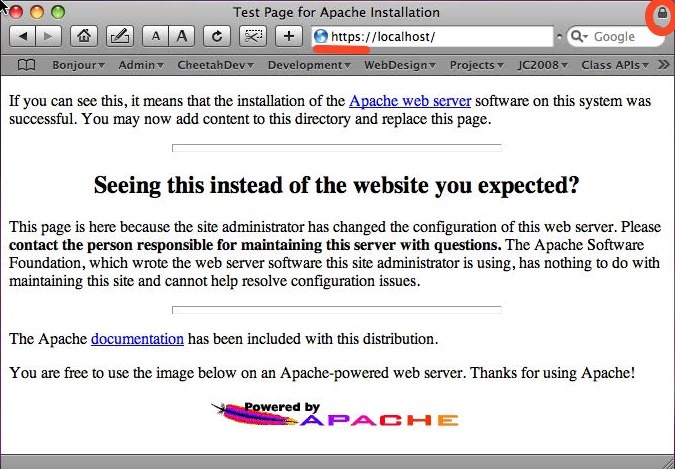 Code for detecting whether SSL is active for the current request:
I'm told this won't work with IIS: