This document tries to catch the errors that every beginner seems to have to go through before reaching Eclipse/WOLips nirvana. The path is narrow and slippery, but thou shalt be rewarded....

The first most common error:

Eclipse/WOLips does not run properly in java 1.4.2.

How to get eclipse running with Java1.5?

The second most common error

I can not get help to start in my browser, things work flakey

The following is somewhat out of date - in general terms it is still true but (as of mid-Feb 2009) Eclipse 3.4(.1) is the required version for (nightly and stable) WOLips, and WOLips nightly is around build number (3.4.)5676.

Eclipse 3.3 is a big, big project. It uses lots of frameworks. Sometimes these frameworks are already in some way available in your environment, but they are old versions, that do not do the expected thing in Eclipse. I had the experience that the help did not start in the browser. If that happens to you, remove all the jars of which you are not sure why they are there in /Library/Java/Extensions. You do not have to remove things like frontbase.jar, postgresql.jar etc.

This should actually fixed in Eclipse 3.3 (Eclipse reads first it's own paths, and then the system paths), but WOLips supports Eclipse3.3 only in the nightly builds. For 3.2.2 you should use the stable build.

The third most common error

WOLips does not behave like you describe. (Use nightly only on 3.3)

WOLips updates often. There is a stable version, (4118) that should be used on Eclipse 3.2.2, the nightly version is where it's at now for 3.3 (Officially released 29th of june 2007). It is used in production by the wonderful people from MDimension who develop WOLips and other WebObjects developers. If something breaks in nightly, it gets fixed immediately. They depend on it themselves.

The fourth most common error

I can not install the projects I built, the WOLips install does not work, strange things happen. (be admin)

Allthough we all know that we should not run as admin, for installing Eclipse you'd better be. If you have installed Eclipse on one of the common places, or it has been installed for you, than the permission from the Eclipse folder will prevent you to install WOLips and other plugins. Make sure that, if you are installing plugins, You are allowed to do so.

If you are working on a Mac where multiple users will need to use Eclipse, you have to change Eclipse's permissions because it will not allow other people to install features, even if they are in the admin group.

If installing your frameworks does not work, than it might be that you are running as a plain user, not admin user. The WOLips ant install by default tries to install in /Library/Frameworks, and Apps in /Library/WebObjects/Applications. As a plain user you should not have permission to write there.

I created a component but I don't see it in the Components folder!

Why don't I see all my files?

Not all the files are presented, some are filtered away. In Package Explorer (In WOLips pespective, the upper left window), go to the right corner of that window, there is a caret. Under this caret, there is a Filter option.Click on it to see what get's filtered away. 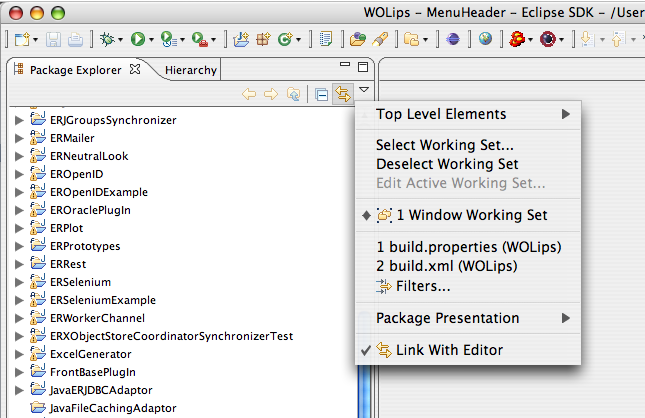 As you can see, quite a lot of files are excluded from the view. 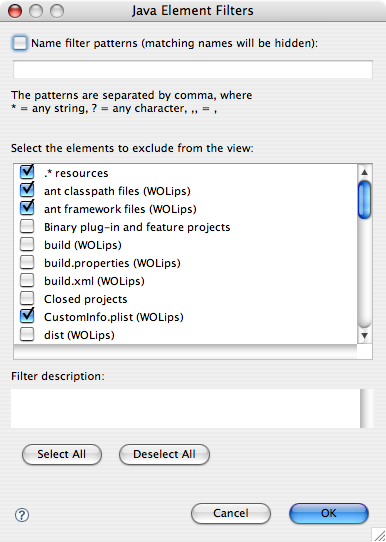 Where did all my code go?

Suppose you suddenly ended up with something like this: 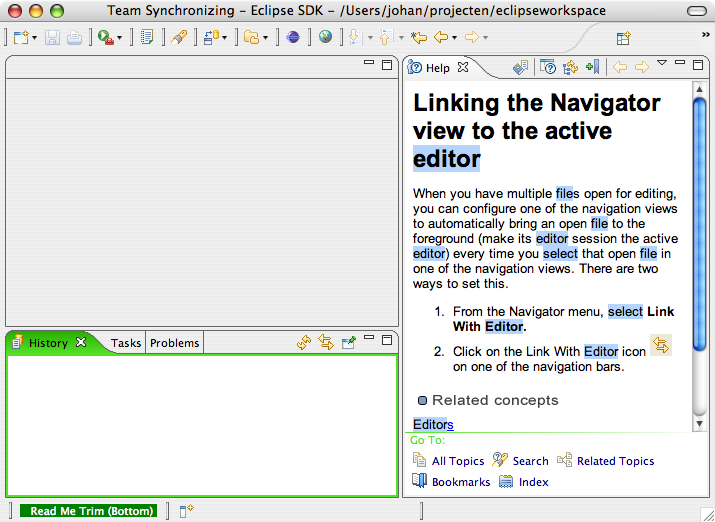 Most of the times this is caused by inadvertently clicking on the menu-bar of the subwindow. That window will then fill the whole workspace.Clicking the menubar one more time will restore the view.

Or it is happened because your perspective has changed inadertently, because you clicked on a file that caused another perspective to be fired up (like Entitymodeler) You can go to the top right, where there is a place where the currently loaded perspectives are located. Choose WOLips again. You're done.

I have the right perspective, but it is all screwed up.

That happens. A lot, if you are inexperienced. And even if you are experienced. Eclipse does some things inadvertently, and as it does not conform to the Apple Interface guidelines, you might press something that has an other effect in Eclipse.

Do not worry: there is a menu button, Windown->Reset Perspective that will give you the original settings back.

Which file from which project am I editing?

If you open a lot of projects at the same time, you'll sometime find yourself editing a few Session.java or localizable.strings files at the same time. How can you see which file from what project you are editing? There is a simple trick for that: in the Package Explorer window, click on the icon with the two arrows on it. From now on, if you select another file in the editor window, you'll be directed to that file in the project in Package Explorer.

Another app is running than I expected:

Normally you select the project in the Package Explorer, goto to the contextual menu (via right click), then click Run WOApplication. you can also go to the Run menu. Or to the Run icon.

Don't suppose you are running the app you are running because you selected the project and pressed the run button in the toolbar. It will run the last application you have run, no matter what you have selected in the package explorer. You have to do a "run as", select your program and then you might get your app.

I want to run my app with some other arguments. 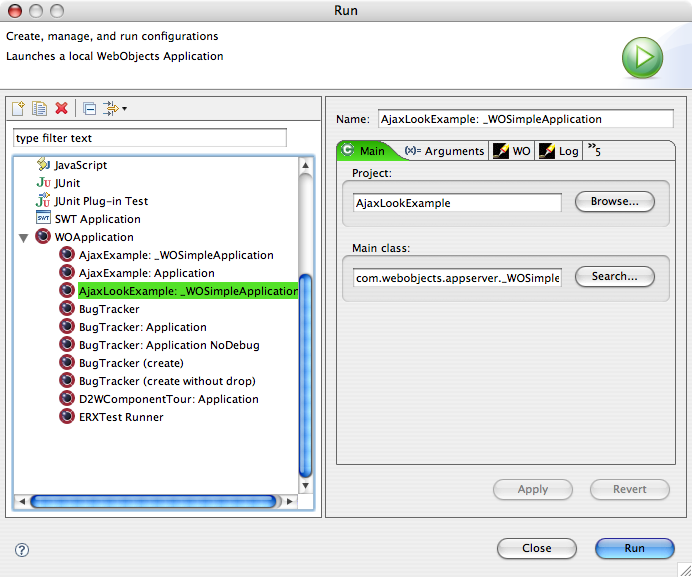 You'll get into the create,manage and run configurations window. If there are any launch configurations available in your projects, you will already see them here. If there aren't any, a new one will be created. Normally the proper settings for a WOApplication are all in place, if you have created the application from the contextual menu. See the tutorials.

Note that if you are overriding a parameter supplied by WebObjects, such as WOPort or WOAutoOpenInBrowser, then you need to add the parameter settings in the Arguments tab that you see above. For example, you can add "-WOPort 55555 -WOAutoOpenInBrowser NO". BUT, you also need to uncheck these entries in the "WO" tab above. If you do uncheck them, your suggestions may be ignored.

By default these settings are stored in the workspace, not in the project. If you want to store them in the project, you have to change the settings under the "Common" tab, from "local" file to "shared file", and you can save it then in your project for future use.

I want to open EntityModeler in a new window, so it does not get in the way of WOLips

There is a setting in the WOLips preferences, which will get your EOModel started in a separate EntityModelere window:

I see all that magic typing with code completion going on. How do you do that?

The shortcut is Control-space on the Mac, by default. It is also known as contextual assist.

Actually, it is real magic. The trick is that it works in a contextual way. So the program knows what kind code can be expected where. For instance, if you are inside the bindings of a WOComponent, it will know which bindings are there. Just press Control-Space, and you will get the possible endings.

Which shortcuts are available?

I don't know. It depends on the plugins you are running. Fortunately, there is a shortcut to end all shortcuts:

cmd-1 = Quickfix: suggest you a fix for your errror
cmd-e = quick switch to other open documents
cmd-space = completion, also known as content assist. This one screws up with the standard settings for Spotlight, which are also cmd-space. Some have tried to move cmd-space to something else in Eclipse, but that does not seems to be picked up everywhere. Better replace Spotlight to something else.

Some shortcuts that are available from WOLips (gracefully donated by Mike Schrag):

Another nice overview of shortcuts that Edgar Klein sent me can be found here: http://eclipse-tools.sourceforge.net/Keyboard_shortcuts_(3.0).pdf. It can be even printed out on one double page, so you can put it above your bed.

I have the choice of doing a WOApplication or a WOnderApplication, which one should I use ?

If you are using a old build of WOLips, you should use the Wonder layout, you just need to remove the references to ER* if you don't use Wonder.

If I right-click on an folder and select "New", I don't see "EOModel" or "WOComponent" as options.

Make sure that your current perpective is "WOLips", if you are in the "Java" or "J2EE" perpective, all WebObjects-related file types are not available.

Component Bindings are Showing Errors, but No Error Is Present

This can occur for example where you are overriding valueForKey(..) and so the component editor is not able to know that a keypath is valid. In this case add //VALID at the end the association and Eclipse will stop taking this to be a bad binding. An example follows;